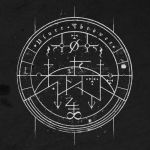 BLURR THROWER may not be a household name, but it certainly is a weird one. I bet you’ve never heard of French BLURR THROWER. I certainly have not. However, deeply inspired by Cascadian Black Metal – with bands such as WEAKLING, FELL VOICES, ASH BORER, TIME LURKER, PARAMNESIA – the band tries to respect the legacy of crepuscular Black Metal, loaded with occultism, to which the French scene contributed a lot. They are definitely Black Metal, but their sound also incorporates aspects of Post Black, Ambient Black, Folk Metal, and the so called Cascadian vibe. The band’s debut album consists of only two tracks and lays out the template for its sound, which is mostly lots of BURZUM and mid-period BATHORY with Cascadian flourishes, wrapped in a shockingly convincing BURZUM-esque lo-fi production. That’s why it’s addicting. That’s why I have come back to this album again and again. The devil does not lie in the details, rather in the smothering ambiance that the composition uses to tighten its tendrils around your throat and choke your life away. Buy it! www.facebook.com/blurrthrower, www.lesacteursdelombre.net