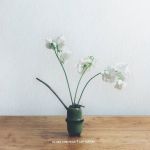 When I saw the name of this French group, I supposed it might be some kind of a comedy band like JUDAS PROST – the French seem to be fond of this kind of thing. But I was completely wrong. In “Les Voûtes”, their debut album after having released just an EP with two songs (even if each one is nearly 20 minutes long), BLURR THROWER play an atmospheric Black Metal of a disturbing nature, evocative of depressive and tragic states of mind. The music seems like a dreamy descent into the darkness, with vocals resembling wails of suffering and despair over very fast drumming together with guitars playing hypnotic, minimalist rhythms and creating a somewhat monotonous tunnel of sound. There is also a marked penchant for unsettling intros and outros of monochordic dismal droning, and even the cover artwork equally expresses their Post Black Metal aesthetics, consisting in an artful, stark photography of a few white flowers in some kind of design pipe laid on a wooden table. The album features only four tracks – which nevertheless a total of nearly 40 minutes of music – that are hardly distinguishable from one another, with a possible vague exception in the final song ‘Amnios’, perhaps a little more adventurous. This is for the seekers of purely atmospheric music, as there isn’t much else to be heard. Maybe in creating such compositions they succeed in evoking the barrenness of coldness and misery before the tragedy of an existence devoid of significance. That’s my guess, anyway. If this is the kind of thing that floats your boat, be sure to check it out at www.facebook.com/blurrthrower, www.facebook.com/ladloproductions