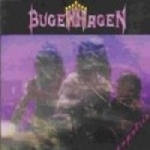 East Frisian Thrashers BUGENHAGEN return with their second MiniCD – and not much has changed. Perhaps the real Heavy Metal-ingredients have been reduced in favour of a more thrashy approach and the songs don’t seem to be as catchy during the first listen like the songs on "Unbag The Cudgel". However I think it is justified to say that this band has meanwhile found its style, very retro but you can hear the band has found its own way: short songs, pregnant riffing and no superfluous ballast. Here and there some choir-like choruses – finished. Especially ‘No Breeding Ground’ and ‘Horror Channel’ (minus the "Terminator"-sample at the end) are worth a try if you have the possibility. I really think that BUGENHAGEN is ready for a full-length-album. However, two things should be considered before recording a new album: first of all, I am not sure if the rather modern sound they got in the Soundlodge fits as good to the sound of BUGENHAGEN as the production on the first mini, and please never(!) ever(!!) again use such a viole(n)t colour for the songtitles again. Some eyes may turn blind. Recommended for all who still think the 80s were the golden era – and honestly who doesn’t? bugen.hagen@freenet.de