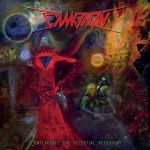 Formed back in 2013 this American band (although one member recently moved to Germany) is formed by veterans of other extreme metal bands such as REIGN OF TERROR and HATE ETERNAL just to name a few, so it is no surprise that their debut album is such a strong piece of very fast and evil Death Metal that recalls sounds of early MORBID ANGEL or ANGELCORPSE in a quite technical and complex way of playing and executing, with vocals that are high pitched thus giving it a black-ish touch. The production values are very good, maybe the overall sound is a bit compressed and could be more dynamic in that aspect. At times it reminds me of bands like KRISIUN and also more of AURORA BOREALIS. The drumming is very good, it keeps a very fast tempo most of the time, which makes the songs have a very similar vibe and sound. You see, for example an album like “Blessed Are The Sick”, the band lead by Trey Azagtoth, has a balance between very fast songs and also heavy more slower songs, yet never losing heaviness, something that could work a lot for this band, as even a fast Metal freak like me can use a break from full ahead brutality for some impending heaviness once in a while. Also the vocals could use a bit more variation as they do sound the same all the way, something that even in a limited style as this kind of high speed Death Metal can be actually done and achieved with great results as it can be heard in the cult band FACE OF EVIL, which also has a very similar style in composing and executing, yet with subtle things that makes it more enjoyable. But remember, this is their very first album, so with the grace of all evil, we can only expect better things in the future which I am anxiously awaiting like the executioner in front of its victim. www.facebook.com/cambiontx, www.facebook.com/lavadome