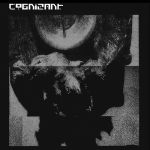 Everytime someone recommends a Grindcore band, I usually pass. Good old Grindcore done the good old way is really hard to find nowadays. Power Violence, Hardcore Punk, Mathcore and all their variants and mixes are more associated with Grindcore than I would like it to be. But don’t take it from me, an old fart whose fave bands are old NAPALM DEATH, ASSUCK, PLUTOCRACY, NASUM, PHOBIA, etc that mostly deal with social, anti-political and philosophical issues. Luckily enough, Northamerican Texan band COGNIZANT seems to take a lot of influence from said bands, in both music and lyrics, and have created their own style, adding a certain atmosphere close to NAPALM DEATH’s “Fear, Emptiness, Despair” album and then pushing it forward. Their songs clock around the 1:30 – 2 minute mark, making their self-titled album an amazing and varied 17 minute tour-de-force in turn of the century Grindcore. The dual guitar attack of Alex Moore and Irving Lopez is solid and full of technical brush strokes, so to speak. Yet, it remains constant and they both churn out riff after riff with ease. There are lots of tremolo driven parts, but also they creatively mix in open dissonant chords and palm mutes. Thus, each song has its own identity and they relate to each other as a whole. The rhythm section composed of bassist Brad Luttrell and drummer Bryan Fajardo (the later also member of bands NOISEAR and P.L.F.) is precise and razor-sharp, adding lots of dynamics and tightness. And on top of it, you have Kevin Ortega’s vocals, which bring a lot of character into the overall sound of the band. His tone, a combination of low and occasional high grunts, is a perfect fit for the music. Production wise, the guitar and bass tones are full, round and clear, showcasing how technical their riffing gets in certain parts. The drum sound is natural and punchy (I dare say there were no triggers and / or samples involved in this recording). Regarding the mix, the vocals are a tad pushed back and in certain segments they feel as part of the instrumentation when it comes to the phrasing. I think this was a very clever detail that sums up when listening to this album. I have listened to it around 4 times now and I keep discovering bits and pieces that passed me by in the previous spins. Although the album was released in 2016 (present time is 01/2021), this is the much welcomed CD reissue by Polish label Selfmadegod Records. And it was definitely a huge surprise that I haven’t heard it before. I hope this push will make the band more noticeable in the global underground, because they deserve all the attention they can get. They have also released a split and single in 2018 and a new split in 2020, so there is more material that I will check out for sure. COGNIZANT is a band you don’t want to miss out. Personally I think it is one of the most exciting Grindcore bands I have heard in the last 10 years and I look forward to a new album or split or anything they put out. Go show them some well deserved support here: www.facebook.com/cognizantgrind. You can also get this album from their label here: www.selfmadegod.com