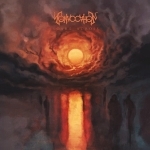 Helsinki, Finland… Land of abundant extreme Metal that hardly ever fails in delivering. Land that is best known for its aggressive, blasphemous Black Metal. But in this case, Death / Doom duo CONVOCATION throw out a slow, churling, monstrous mass of decay. MN (vocals) and DESOLATE SHRINE’s LL (who plays all instruments in both bands) turn the corner in their usual neighborhood of music and provide a very consistent, four-song, 50 minute epic sure to rattle our bones and turn us over in our rotting graves. ‘Disposed’ opens up the album with distant vocals of growling despair as the guitars strum and meander and the drums plod and pound. The thickness of this and every song thereafter makes me feel as if I’m wading through a swamp of death and murkiness. ‘Ruins Of Ourselves’ begins with atmospheric guitars and keyboards while a choir-like voice sings in the background. The slowness of the song finally picks up about 3 minutes in, albeit briefly, before melding into a lumbering tower of flesh at turtle-like speeds. This is music to play loud to get the full effect of what the duo is portraying. Let the aural wall wail and plunge into your soul. ‘Allied POWs’, the third track on CONVOCATION’s first full-length, is another 10+ minute journey of masterful proportions. LL, playing all the instruments, actually sounds like a full band, which is an achievement in itself. Normally, other bands fail to expand the sound with only one musician. Pianos tap tap into the final track as acoustic guitars shimmer throughout, until almost 3 minutes in, MN’s vocals rasp into our ears with a monolithic aching before clean vocals (mixed with high-pitched screeches) even out the song in what seems a winding, burrowing path of endless darkness. "Scars Across" is an album to savor, to listen to when you aren’t occupied with something else, to enmesh yourself in while letting the music make you high as a kite on its own. For more information, check out www.facebook.com/convocationdoom, www.everlastingspew.com