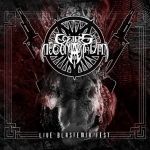 During the more than 30 years since it was born from the exploding Thrash Metal scene, Death Metal became a worldwide phenomenon. If you take a deeper look and do some in-depth research, you will find Death Metal bands from every continent and any area of the world. Meanwhile the strongest and most vivid underground scene is based in Latin American countries. Even small countries like El Salvador, Panama or Costa Rica seem to have a very interesting scene. Talking about Costa Rica, I have a gem from there to present to you: CORPUS NECROMANTHUM from the capital San José. Started in 2005, the band released a full length demo a year after their formation. But after that, they didn’t put out anything else and instead went on hiatus for a longer time. Two years ago, Lord Mephistum (drums) and Leviathan (bass and vocals) restarted CORPUS NECROMANTHUM with the new guitar player Asmodevs. This new line-up became very busy and as a result, they released two records in the same month. Asides from the EP “Necrodemon” CORPUS NECROMANTHUM also unleashed a live album with recordings from last year’s Blasfemia Fest in their home country. Of course the sound quality is not top notch, even though it seems to be a soundboard recording that was reworked afterwards. But the pure violence of the performance compensates the listener for that flaw. Nine songs of really brutal Death Metal with a liability to Black Metal, especially as the atmosphere and the speed is concerned, demand some involvement from the listener. But the reward is some really devoted Death Metal stuff with some highlights. Asides from the tracks from the EP, there are two old songs from the demo standing out in particular. First there is the band anthem ‘Corpus Necromanthum’ with some great guitar harmonies, the most melodic song on this album. And then there is the rather simple, yet fantastic ‘The Arrival Of The Ancient Ones’ with its HELLHAMMER vibes. These two songs alone are worth checking out “Live Blasfemia Fest”. If you want to find out more, read my review on the “Necrodemon” EP from CORPUS NECROMANTHUM and visit them at www.facebook.com/corpusnecromanthum