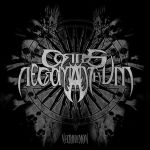 The Costa Rican three piece CORPUS NECROMANTHUM are the busy bees of the year 2020 so far. Asides from putting out their fine live recordings from last year’s Blasfemia Fest in Costa Rica, they also went to the studio to record a three song EP. This release was called “Necrodemon” and all of the songs can be found on said live album as well, of course in different versions. The entrance of the EP after an intro piece was chosen a little unfavourably, as ‘Los Infernales Caminos De Leviathan’ is an instrumental that is pretty good on the one hand, full of blastbeats and riff massacres. But on the other hand a song with vocals would have been a much better choice, especially for a short player that already has an intro piece. But that might be bean counting from my side. The other two songs, ‘The Taste Of Her Slow Death’ and ‘The Necrodemon Manifest’ are really fine examples for brutal Death Metal with a blackened vibe and a good sense for not overrating harmonies. In my eyes, CORPUS NECROMANTHUM are even a little better than comparable acts, due to their ability to transport those already mentioned blackened vibes in their sound. Furthermore, they understood that brutal music needs a brutal and raw sound, something that “Necrodemon” definitely features. Maybe the sound could have done with a clearer drum sound, as especially the blastbeat parts sound a little mushy at times. Nevertheless, CORPUS NECROMANTHUM have released some stuff here that might ring a bell in the underground. So go and visit them at www.facebook.com/corpusnecromanthum