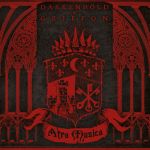 Once more I have the pleasure to review a new release from the very inspiring French label Les Acteurs De L’Ombre Productions. And it’s a split release again, which is always a nice opportunity to check out two (sometimes even more) bands at once. This time, it’s two French bands that are rather new to the label. Both GRIFFON from Paris and DARKENHÖLD are already around for quite a while and have released some records, DARKENHÖLD even have four full lengths and three split albums out by now. The label’s debut of the two bands, entitled “Atra Musica”, starts off with the four songs from GRIFFON. These guys are pretty near to the melodic Black Metal from the mid of the 1990s. Yet, the five piece added their own ingredients, their special spice to this sound. Their breaks are often inspired by neo-classical music and thus reminded me a little of Italian bands like early RHAPSODY (before they became a pain in the ass) or like-minded acts. Especially the closing instrumental ‘Interlude’ is done in this manner. In ‘Jérusalem’ we also find a distinct touch of Folk and medieval music, making this one my personal favourite from GRIFFON here. The four songs from the medieval inspired Black Metal act DARKENHÖLD are nothing less than a really ambitious experiment, since they are recorded unplugged! At least three of them have been released before with English lyrics on their early recordings, before the trio changed to singing in the French language only. And to be honest, this folkish and medieval sounding unplugged Black Metal really is a challenge. Yet, with a few more listening sessions, especially ‘Marche Des Bêtes Sylvestres’ and ‘Citadelle D’Obsidienne’ turn out pretty fine and develop a charm reminding me of medieval songs. In sum, we have another remarkable release from Les Acteurs De L’Ombre, mainly due to the completely uncommon new approach of DARKENHÖLD to their own music. Give these songs a chance and check them out at: www.facebook.com/darkenhold, but don’t forget to lend GRIFFON an ear or two as well: www.facebook.com/griffonblackmetal. And be sure to visit their label if you are into finest Black Metal: www.lesacteursdelombre.net