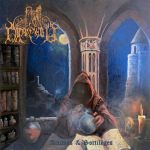 In the genre of Black Metal, DARKENHÖLD from Nice, are already something of a genre veteran. Founded in 2008, the trio has released four full albums and with “Arcanes & Sortilèges”, long player number five is now released, with the same line-up as when it was founded twelve years ago. By authentically set the Middle Ages to music, the new record is heavily spiced with Speed Metal herbs, which combined with all the castles, wizards, wiverns to transform mind. On top of that, engrossing synths, the acoustic guitar parts, drum fills and of course, melodic Black Metal in the traditional vein, are the foundation of this sonic journey in mediaeval time. The opener ‘Oriflamme’, a driven track that bathes in a threatening darkness and is decorated with medieval accents, immediately sets the atmosphere and is almost a blueprint for what all is unfolded later and throughout the whole running time. Diving deep into the record with ‘L’Ost De La Forteresse’, ‘Mystique De La Vouivre’ ‘La Tour De L’Alchimiste’ and ‘Bestiaire Fantastique’, you will hear the raw and powerful vocals in the language of Molière, which soaked with the essence of all things primitive and mystical. Furthermore, the strength, energy and drive that bathed each nine songs in a threatening and dark light, are particularly enticing and established the fantastic song-crafting skill by the French castle dwellers. ‘Incantations’ is a strong example of that. No wonder, why the band has a large following and if you don’t have anything in the DARKENHÖLD shelves yet, this new release can be a good start to experience their lure. Explore more about the band and label here: www.facebook.com/darkenhold, www.facebook.com/ladloproductions.