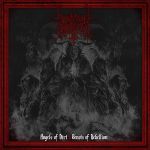 Germany’s DARKMOON WARRIOR have been around since 1996. Although they’ve released plenty of demos in the early days, they’ve only released three full-length albums (since 2009). Even though the band may be slow in providing us with new albums, when they do come out it’s well worth the wait. “Angels Of Dirt – Beasts Of Rebellion’ begins with a rapid-paced Black Metal trampling with first track ‘Thermonuclear Predator’. The razorblade-scarred vocals mesh well with the powerful, smoldering riffs and the tight drumming. ‘Coracao Sinistro’ is introduced by a blood-curdling growl and erupts into a ferocious blitzkrieg of dark domination. 45 seconds in and the drum / guitar breakdown is orgasmic. Then chaos ensues. It doesn’t stop with ‘XX.XV.XX’. Lightning-fast guitars herald in a remarkable array of sonic onslaught before chugging into a segue that leads back to pure Black Metal demolition. Goddamn if this band doesn’t kick our balls into our guts. ‘Into Thy Crimson Realms’ is a slowed down (at first), yet fucking kick-ass track with riffs that’ll peal your flesh from your bones while sneering at your terror-stricken face. ‘Blackmetal Anarchy’ is just what the name implies, as ‘Svjatogor’ is a thrumming, pulsing, slithering serpent. ‘Brenne Für Mich’ is a slow-boiling substance at first until the band charges ahead at full speed. It’s followed by final track ‘Angels Of Dirt – Beasts Of Rebellion’, with its Punk – like intro which morphs into an almost 80s era classic Power Metal sound while still maintaining the Black – encrusted vocal style. Will DARKMOON WARRIOR beat the living fuck out of you while making you beg for more? Yes. Will they make your ears ejaculate a pile of aural bliss? Yes. And will they make anyone’s top-ten album list of the year? Most likely. For more information, check out www.facebook.com/darkmoonwarrior, www.folter666.de