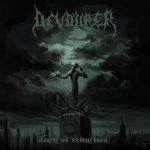 Third full length from this Swedish horde, formed by two talented individuals that are also active in other bands like SORCERY and PATRONYMICON. This album is a perfect mixture of some of the best Swedish Black and Death Metal. MARDUK is probably the band it reminds me of the most, especially their latest works, but there is also a big influence of bands like UNLEASHED and NECROPHOBIC. It has these melodic yet grim riffs with a very powerful yet clear production, and a very good execution. Sometimes images of NAGLFAR and early DARK FUNERAL come to me when listening to this album, although DEVOURER has maybe a more controlled tempo. There is a slightly similar sound between the songs, especially in the faster parts, yet the guitar riffs keep it interesting and have an old school Thrash influence, Thrash of the evil type I must admit. Considering all the instruments are performed by one person, in this case John Falk, who also plays drums and bass in the legends SORCERY, also makes this more interesting. The idea for the cover art is also quite interesting, a different take on why humanity as a race is leading to its own termination. If you are into this icy Sacandinavian Metal of Death and darkness, make sure to listen to this. A very powerful album with some killer riffs. More about DEVOURER at www.facebook.com/devourermetal, label contact: www.facebook.com/ibdc666