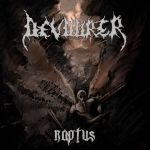 WOW! DEVOURER delivers another strong Swedish Black Metal album! For a band that’s been around for 2 decades, DEVOURER haven’t really been out there, it’s not like someone particularly refers to them in casual discussions. However, they’ve been at the craft ensuring it hasn’t been distorted by time. The opener of the album “Raptus”, ‘Bearer Of Dark Tidings’ takes me to ANAAL NATHRAKH. This is just an abomination raining down on the fertile lands of life, DEVOURER channels all their hate and angst into a creative outlet, couple that intensity with the maturity in songwriting that DEVOURER display here and we’ve more or less got a strong album here. Granted, post the first listen when you get back to the album there are points that you’d show up but that’s alright. At under 42 minutes, DEVOURER packs enough punch on every song to keep the listener engrossed. ‘Ton 618’ as an example is rather a slower track, but doesn’t stray from the core formula. It however still adds to the variety available on the album, the machine gun drums in the backend are raining down constantly whilst the atmosphere adds in a melodic layer further soothed by the harsh vocals that simply cuts through the entire denseness. Sometimes DEVOURER’s output feels like the soundtrack to the inevitable and other times it gently soothes you to comfort. All in all, DEVOURER’s “Raptus” is a solid effort with some phenomenal writing spread all across the album. I’m sure you will find a few points here and there upon repeated listens, but the positives easily outweigh those aspects on this album. Check it out for sure, recommended! For more information, please visit: www.facebook.com/devourermetal, www.facebook.com/ibdc666