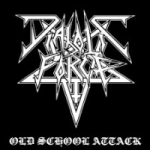 Ha – something went wrong. Completely wrong. This output here is "The Final Sign Of Evil", not what Steamhammer released under the same name. Recorded during the original sessions, back in the eighties, performed by the early SODOM line-up. Ok, just a joke. What we have got here are old HELLHAMMER recordings, for some unknown reason released under the name DIABOLIC FORCE – "Old School Attack". Well, just kidding again. Now, seriously – DIABOLIC FORCE really managed to transfer the so often quoted "old school vibe" into the next millennium. Additional influences besides the two bands above are acts like VENOM, BULLDOZER, EXUMER and DESTRUCTION. Every time I listen to this album I wonder how they manage to sound exactly like the mentioned bands did back in the eighties. A time machine? Nonsense, I think the reason is relatively easy. The band originates from Brazil, and I guess the extreme Metal scene can be compared to the Metal scene in Europe back in the eighties, regarding aspects like enthusiasm, being non-commercial, the infrastructure (studios, rehearsal rooms, equipment). It is still underground, still old school whereas the European scene has developed and left the underground behind. But enough of such speculations. The A-side of this album contains the "Old School Attack" EP, recorded back in 2001 and originally released by Dark Sun Records, if my infos are correct. Side-B features five rehearsal songs dating back to the year 2002, which also got previously released, this time by Death Strike Records. Hopefully No Colour Records is going to release more such gems instead of promoting dubious and suspicious NSBM acts. Band contact: diabolic_force666@yahoo.com.br