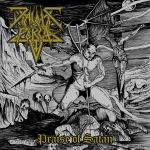 Checking backwards in time, DIABOLIC FORCE released their sophomore album “Praise Of Satan” in 2017 by the hand of Mutilation Records, and then it was re-released by Hells Headbangers on the three classical formats as usual for this blasphemous trio. Introducing DIABOLIC FORCE for those who have been out of South American issues and don’t know about them, they belong to the Rio de Janeiro Metal circle and as vast as the city itself, the number of similar bands related are. Some names as ATOMIC ROAR, FLAGELADÖR, FARSCAPE, WHIPSTRIKER could describe pretty much what you’ll found here: Black / Thrash Metal with strong roots on HELLHAMMER / CELTIC FROST, BATHORY and VENOM. Given the context, “Praise Of Satan” delivered another chapter of what they best know how to do through a little bit more than half an hour, but in comparison to their ultra-violent 2001 demo “Old School Attack” and their 2015 first LP “March To Calvary”, there’s a lack of energy which comes with the hand of the production mostly, but on the composition as well. The general sound seems to be scooped, opaque in an attempt to do something dirty and raw as the style demands, turning the whole album to feel the same as the songs are running wild, and that produces to lose some concentration trying to understand the reasons for their change. ‘Whorehouse Queen’ is the only song that distinguishes itself from the rest, with slowly relentless flangered guitars, followed by an abrupt tempo change which is a real Metal fist in the face, but the haunting ghosts of their previous works keep on lurking afterwards. On the other hand, the lyrics and artwork are something expectable for this kind of Metal, nothing new in terms of shock and controversy to remember after 9 songs with intermittent time lengths. Being honest, at this point my scarce words are the reflection of what it seems to be, a record that I’ve heard before tons of times on other occasions. So, even DIABOLIC FORCE knows their duty and old school path well, “Praise Of Satan” is a clear step back hopefully to be for a relentless assault in the future. For more information check out www.facebook.com/diabolic-force-904653226214486, www.facebook.com/mutilationrecords, https://hellmusicrecords.bandcamp.com