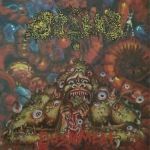 What is a DIPYGUS? What is a “Bushmeat”? If anything, the first song will have to give a clue: ‘Ape Sounds’. And then the sound of liquids that, just by hearing it, definitely drip from something dead… this is it. Caveman Metal. Ape Metal. Dying Metal. Putrid Metal. And, oh boy, I like it. Yes, this is totally senseless. The cover art is disgusting, the logo is ugly and the music follows. But it follows the AUTOPSY steps like a soul without corpse. In fact this is so close to my fave album of the Death legends “Severed Survival” that it is scary. The production if raw, evil, caveman-like and it rules. The execution is just insane, if they go out playing with a gorilla mask, it will fit right on. This is what apes will play if they somehow do a Death Metal band. Then later we can see the Liberty statue on the sand, but meanwhile I will enjoy this. And this is how Death Metal vocals are supposed to be, gurgling, gargling, spewing yet not sounding the same all the way, and adding shock to the horror. Damn, they do it at times better than AUTOPSY (blasphemy maybe, but yes), like it can be heard on ‘Plasmoidal Mass (Slime Mold)’ and those melodic creepy passages, man, so great. This is, hands down until today, my fave album of 2021. Don’t get carried by the name and cover artwork, this is no senseless porno gore or slam gore or silly ultra brutal nonsense. This is it, the pure unadulterated sound of Death Metal in its primitive, primordial form, that many try to capture, but only a few are able to conjure. Now I want a damn Bushmeat whatever it takes, whatever I vomit. www.facebook.com/dipygus-1626333840945573, www.facebook.com/memento.mori.label