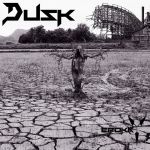 DUSK is an electronic project from Costa Rica and their current longplayer gets released by GS Productions from Russia. The album starts with ‘The Arrival’, a dark and keyboard driven intro before ‘Directive 7’ offers an industrial version of FEAR FACTORY with Metal guitars, keyboard sounds fast drumming (I assume it is a drum computer) and an electrical voice. Very electric material with a dark and diabolical atmosphere and best to be described as a mixture of MINISTRY, STRAPPING YOUNG LAD and the mentioned FEAR FACTORY. After the interlude ‘Malevolent Engine’, ‘Demons Be Driven’ starts slowly with sampled voices but continues far more aggressive and could also be described as Industrial Black Metal, so fans of the 90s project DIABOLOS RISING could like this as well as this track is total destruction. ‘Epoka 3000’ shows the other side of the project, which is hard electronic sounds so also fans from the EMB / Electro scene would not be disappointed at all as DUSK crosses the boarders between several dark styles but captures the dark atmosphere in all of the tracks. ‘Dark Shaman’ offers another side with other influences. Choirs mixed with Arabian sounding percussion sounds mixed with industrial tunes and some sharp breaks before ‘Rebellion’ returns to the more aggressive Industrial side of the project with some more brutal vocals and some headbanging guitars. The remaining tracks, mostly one instrumental interlude and one normal song in a row, are on a similar level but for me the outstanding track of the album is ‘Fiction Veracity’ which is a pretty soft electrical song. Definitely influenced by the Gothic / EBM scene, this track offers by far the best atmosphere of the album, even though it is the softest one, but the keyboard sound and the memorable melody is outstanding. Fans of harsh Industrial Metal should give this project a chance by checking it out. I personally would be interested in some more stuff in the vein of ‘Fiction Veracity’. More info can be found here: www.facebook.com/duskvt, www.gsp-music.com