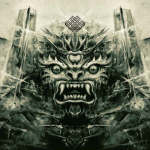 One man band EGO DEPTHS returns with a new slab of material that is certain to keep you filled with Funeral Doom. Stigmatheist is the mastermind behind this concept and has been hard at work churning out 3 albums in 3 years! The latest is his follow up to 2014’s "Oligoria Blodd" and he doesn’t show signs of slowing down. Now keep in mind there are only 5 tracks on this album but the album length is over an hour (so much about not "slowing down" ; -) – Frank). Diving right into the first track from the album you can clearly tell this is EGO DEPTHS, the ambience starts off with a majestic guitar sound almost mediterranean in nature, followed by the a primal drum sound mixed with growls / echos. Very good way to start an album and also the shortest song on the CD. ‘Wheel of Transmigration’ is an opus of pure atmospheric anguish and at over 18 minutes it really does accentuate the melancholy. One of my favorite tracks on this album is ‘The Onward Tide’, the song is an instrumental piece and has a mesmerizing / hypnotizing guitar sound. It is further followed by intricate drums and really gives the listener a feel of relaxation but with a hint of fear. ‘Awakening of Gshin-Rje, The Lord Of Death’ is an interesting jam, it starts off with some odd instruments and slowly builds with a guitar hook towards a doom-driven song. What I found a bit odd was this song seemed like it was a lower sounding than the rest of the album, as if the sound was lowered a couple of levels… maybe it was my version of the song, but nonetheless the music speaks for itself here. Good guitar hooks, the right amount of bells, and the sudden tempo changes bring out the nature of the song’s title. In summary EGO DEPTHS once again delivers an excellent piece of work that only shows they have the right formula for the genre of Funeral Doom. Pushing the boundaries of the genre and truly touching upon the darkness. Stigmatheist is a jack of all trades by handling all the instruments on the album and talented muti-instrumentalist. This is a solid effort and I recommend this for fans of Doom and Funeral Doom, but again beware these songs are lengthy. For more info: www.facebook.com/egodepths, http://egodepths.bandcamp.com, www.dusktone.eu