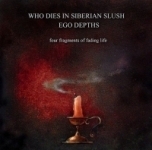 Funeral Doom has sure had a good start to the year. After being blown away by DREAMS AFTER DEATH’s debut album I looked to see what the future would bring. MFL Records has released a split of Funeral Doom Metal with the two acts WHO DIES IN SIBERIAN SLUSH (WDISS) and EGO DEPTHS. I was first exposed to EGO DEPTHS via the Death.FM webradio site and boy was I glad to be introduced to the band. Immediately after checking them out I got in contact with the mastermind of EGO DEPTHS and its sole member Stigmatheist who sent me the split to review. I’ll start by talking about the first band on the split. This is my first time checking out WDISS and figured I would start out with some background on the band. Moscow’s WDISS started out in 2003 and have since released: one full length, several demos and a split. The two tracks provided by WDISS for this split are ‘The Spring’ and ‘Refinement Of The Mould’. The music is rather good to be honest. The guitars are evenly provided with good melody and nice riffing. The guitar solos have a good solid foundation and give the songs a soul. The only area where I felt the band lacked was in the vocal department as they sounded very sluggish (perhaps alcohol induced) almost as if lacking that "It" factor that can lead a band. Luckily with the music being Funeral Doom, the vocals tend to be outshined by the guitar work. Next up is the former Ukraine / now Canadian one man band EGO DEPTHS. We enter a realm of pure agony and torture when we talk about the musical trip that EGO DEPTHS enables. If you have ever wondered what musical score would sound like when the soul enters the netherworld this would be it. I was impressed with EGO DEPTHS’ full length album "Equilibrium Sickness" and was looking forward to hearing the two new tracks. ‘My Hearse Immortal’ and ‘Unmasker Of The Absurd’ are the new pieces, well worth the wait. Stigmatheist provides an interesting of instruments with a major focus on the guitars. The vocals are guttural and full of pain, fitting the musical approach very well. Certain parts of ‘My Hearse Immortal’ reach out to the listener and burns the melody into the brainwaves. I was a bit discouraged after the 14:00min – 16:00min mark of the song as dragged during those 2 minutes. I found myself really focused on ‘Unmasker Of The Absurd’ due to its entrancing guitar passages. The time changes along with the chord progressions really stood out on this one. This split album serves its purpose by providing some new material by both bands. Fans of Funeral Doom should check out these bands or at the least pick up this split and take a gander at what these two acts area all about. What will these two acts provide next? Hopefully sooner rather then later with new full length releases. Lets hope the Funeral Doom procession continues soon. More info: www.whodiesinsiberianslush.com, http://sites.google.com/site/egodepths, www.mfl-records.com