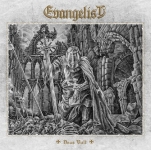 Epic Doom Metal is one of the genres that we don’t see too many new releases within these days, if we ever had. Though it is also a quite tough niche to manuever, as the bands that created it, more or less mastered it from the very beginning. First we had the masters of epic darkness, the mighty CANDLEMASS and then arose the beast from the other side of the great waters, SOLITUDE AETERNUS with more erieeness in the mix. Polish EVANGELIST has choosen to follow upon the path Leif Edling and company laid forth with CANDLEMASS, heavy and extreme powerchords, almost chanting vocals with a good depth, a solid rocking rhythm, more solid and heavy than most mountains. It would be a lie to say that the band brings anything new to the table, besides amazing and catching songwriting and well-performed songs, which are two quite important components of making a good listenable album. I’m quite impressed with the whole set up concerning this album, this music is sublime in its expression, so powerful and doomy, the powerchords are so massive and create the perfect melancholic and dark feel, together with wellplaced guitarleads and the thunderous beats and the expressive rhythm. The vocals are a chapter for itself, a great part of the soundpicture and the articulation is immense and quite important for the overall feel of this album. I can’t really think of a better way to get into the mood, for the upcoming release of CANDLEMASS’ new album "The Door To Doom" early 2019, than listening to this album a couple of times each week, until then, as the quality of "Deus Vult" can bear all the listens, the songwriting is stellar! I’m not sure if this will end up in my top ten of 2018, as it is being released this late, though it’ll be close. Enter the demons gate, take a look in the crystal ball, and take the sorcerer’s pledge: www.facebook.com/evangelistmetal, www.nine-records.com