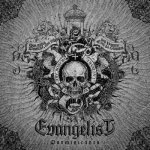 So much Doom already in the name of the record company and in the title of the album – is there any escape from Doom here? Definitely not! EVANGELIST is a band from Cracow, Poland, whose members are and want to remain unknown. Let the music do the talking, so to say. "Doominicanes" is their second album after "In Partibus Infidelium", released in 2011. And it is Doom Metal in every note dropped, in any slow beat played, in any word sung. Just five songs in more than 40 minutes promise epic material! And, damn, these songs are epic! Sure, good old CANDLEMASS must have had a major influence on EVANGELIST, but every band in this genre is influenced by the Swedish godfathers. The vocals are very close to the masterpiece Johan Längquist delivered on the first CANDLEMASS album, but, alas, this unknown guy here meets these quality levels for sure. And the guitars are great. Brilliant riffs, with ear worm qualities, meet desperate leads and fantastic harmonies. Sometimes these guitars even remind me of WHILE HEAVEN WEPT. The best thing here: EVANGELIST also know how to write really great songs, they even created epics of desolation and brilliance. Just listen to ‘Deadspeak’: the refrain is so awesome! And those lead guitars! So great! What a divine song! The best Doom song I heard in this whole century. But the other four songs are nearly equally splendid. ‘To Praise, To Bless, To Preach’ comes along with another great chorus. And the final twelve-minute epos ‘Militis Fidelis Deus’ has nearly everything Heavy Metal in common and Doom in particular ever meant: heaviness meets drama meets songwriting skills at its best. Let’s make it short: "Doominicanes" is the best Epic Doom Metal album since "Epicus Doomicus Metallicus". You shouldn’t miss this masterpiece! Check the label for your personal overdose of Epic Doom Metal: www.doomentia.com or the band: www.facebook.com/evangelistmetal