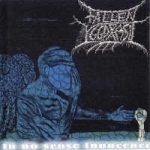 I was already aware of their existence, but before I actually listened to these guys I always connected them (due to their name) with Viking / Pagan Metal – but obviously I was wrong, cause FALLEN YGGDRASIL play thrashing straight ahead Death Metal the old school way! Ever since their origin in 1997 they already released a demo ("Odyssey In Sorrow") and a 7" and played several shows to gain the necessary experiences. And you can easily hear that on their newest 6-song MCD "In No Sense Innocence". Musically they come across very matured sounding already, while the vocals are probably the only aspect I would still consider as a little too one-dimensional. The Death Metal growling still lacks a little bit in diversity and expression. It is neither completely brutal nor charismatic enough to stand out. I will give you an example: people like David Vincent and Ross Dolan both have a completely different, brutal voice, but they are still unique in what they deliver. And that’s something most younger bands seem to overlook these days. The most professional songwriting won’t get you anywhere if the vocalist isn’t able to follow those qualities. But to remain fair in this case. Simon is still far better than a lot of other wannabe grunting maniacs that are out there – he probably just needs a little more time to develop his own personal way of getting the brutality across. There’s a lot of potential sleeping within – now somebody just needs to wake this monster up. The MCD is available for 10€ (ppd.) from: Simon Kratzer, Untere Sonnhalde 4, 72070 Tübingen, Germany, www.fallen-yggdrasil.de