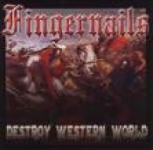 I got these two LPs from the Italian band FINGERNAILS about two weeks ago and after listening to them I decided that one review for both records is enough. FINGERNAILS are a band from Rome, Italia that was originally founded in 1981 but is still active. These two records are re-releases. "Destroy Western World" was originally released in 2007 by Old Metal Records and the songs from "Hell’n’Back" were recorded in 2005. I looked on tried to find some information about the band on Metal Archives, but the music description as Thrash Metal is totally crap. To be honest I really don’t understand these records. The music is a mixture between Punkrock, Rock’n’Roll and Metal but all played very trashy. The sound and production isn’t very good, also very raw and trashy. I didn’t have much fun to listen to this stuff. Some songs or parts / riffs are not too bad and you can listen to it. The best parts are the guitar solos. They are well played and the guy knows what he is doing. A big compliment goes out to High Roller Records because the records are done really nice. Each one has a nice stable paperboard cover, an inlay with lyrics and pictures and the vinyl is 150g and both are limited to 500 copies. www.myspace.com/fingernailsmetalcore, www.high-roller-records.de