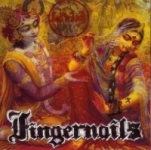 Even though I checked out quite a lot of obscure vinyl back in the 80s, there’s still several bands that I never ever heard of. That also goes for Italy’s 3 piece FINGERNAILS, who got together in late 1981 and released their one and only self-titled 8 song debut full length in 1988 via Cobra Records. Musically the band could easily be associated with acts like KILLER (Belgium), TANK (UK) and of course MOTÖRHEAD, because they also delivered a mostly very doublebass driven, raw form of rockin’ Metal, with lots of obvious inspiration from Lemmy and his gang (leads, vocals etc.). FINGERNAILS nevertheless had a charme on its own so that it’s still quite enjoyable to listen to the material after so many years now. Unfortunately I can’t say that about the stuff that completes this re-release. While the band’s contribution to 1988’s “Lethal Noise” compilation (‘Acid: Shadow Of The Blade’) is still of a similar class as the album tunes, the unreleased studio track of the same year (‘Magic Lady Ass’) as well as the reunion material from 2005 doesn’t convince me at all. Especially the new material (which features new vocalist Anthony Drago and new drummer Fabrizio Lucidi) turned out really annoying. With the more melodic vocal style and the overall rather sleazy Rock’n’Roll sound the chances of the band have gone down to zero these days in my opinion. Only in the song ‘Aids’ there’s a little bit of the old class shining through again (I suppose that it’s original vocalist Maurizio ‘Angus Bidoli singing here). For all further info check out www.angusfingernails.com. Label contact: maniacalrecords@aol.com