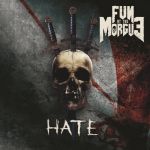 FUN AT THE MORGUE from Geneve are no newcomers at all. After their first album in 2013 it took them a longer while to unleash their new EP “Hate”. After a horroresque intro the title track ‘Hate’ is a mixture of Death Metal, Hardcore and Grind. The fundament is old school Death Metal while the guitars and drums are heavily Grind influenced. The guitars are groovy and the drumming is fast and tight. The song structures and even the length of the tracks remind me of mighty NASUM, a band I really appreciate. So, ‘The Killing Floor’ is a damn fast neckbreaker and shows the guys from Switzerland in a pretty tight shape. But especially the slower parts are pretty good and vary the song a lot. This is really good material I would have expected from a band like the mentioned NASUM. Also the vocals really nail it and the horror-touched parts are damn good. ‘A New Reign Of Blood‘ starts with some SLAYER tunes before turning into a Grind monster again. And also the vocals turn more Hardcore here which offers a pretty filthy note and the groovy guitars really kill once again. ‘Crusty Must Die’ is the track you need to check as well (that’s Grind) before ‘Chemical Extinction’ shows a Grind version of POSSESSED with some SLAYER. ‘You Suck’ is another grindy bastard and pretty enjoyable while ‘Desecrate The Gods’ is a Death Metal track with grindy notes and damn cool vocals. ‘Paranoid Schizophrenic’ closes as the last track with fast blast beats and ugly screams while the lead guitar once again offers its full potential. Another Grind version of “Seven Churches”. Fans of bands like NASUM and older CARCASS mixed with 80s heroes like POSSESSED should check these guys out as the material is pretty fine with matured structures, good ideas and short but good tracks. A really fine trip back into Grindcore, which I haven’t enjoyed for a while. For more info, please check one of the following sources: www.facebook.com/funatthemorgue, https://funatthemorgue.bandcamp.com