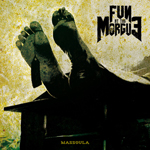 Are you looking for some fun? Might try to have a lot of FUN AT THE MORGUE. These four guys from Geneva in otherwise placid Switzerland have found a recipe for some cruel fun. Their first fun feast is an EP with no less than nine mostly pretty shorts tracks. They name CARCASS, DISCHARGE and BOLT THROWER as their influences. And they can’t deny that. This mix leads to great stuff somewhere between AUTOPSY and DIVINE EVE, some rather slow and grooving, yet sick old school stuff with lots of blasts. A ‘Funeral Overture’ introduces us to the ‘Faceripper’, who sings us ‘The Ballad Of Rudy’, according to the subtitle. This one rips, just like the following ‘Heretic’. With ‘Dark Prophecy’, they slow down the speed to give us a grooving kick in the ass, while ‘Cadaveric Dead Bodied Slain Corpses Died The Dead Death Of Killing Doom’ takes longer to speak it out than to listen to it. The band anthem ‘Fun At The Morgue’ and the grinding ‘Pigfucker Feast’ lead the way to the "not too serious" part of "Massoula"… ‘That’s The Way (I Like Inna-Gadda-Da-Vidda)’ is a pretty funny cover kind of medley of the old IRON BUTTERFLY classic and the old Disco Pop song ‘That’s The Way (I Like It)’, which only the older ones of us might remember from our childhood, even though we did our best to push it to the back of our minds (I even remember the name of the original artists ; -) – Frank). But these cover tunes became a somehow cadaveric new meaning now, thanks to FUN AT THE MORGUE. Finally the Swiss quartet takes a look at their own past with ‘Lobotomie’, a song they originally wrote for SOCIAL DISASTER, a Hardcore band most of them did before FUN AT THE MORGUE. It’s no wonder that ‘Lobotomie’ sounds pretty punked and discharged. If you want your gore and fun pretty simple and still effective, do not hesitate. Go to: http://funatthemorgue.bandcamp.com. Facebookers, find out more and give ’em a "Like" (as I did) on: www.facebook.com/pages/fun-at-the-morgue/317256088379421