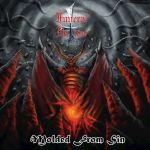 I think most of you will have heard the name FUNERAL NATION, even though a lot of you might not be familiar with their music yet. The story behind the band from Chicago is a story of mishap, bad timing and misconception. Formed by former members of FUNERAL BITCH and ABOMINATION in 1989, FUNERAL NATION decided to continue the simple, yet extremely brutal approach to Thrash Metal of the bands they left. Soon after their formation, they released a demo tape called "State Of Insanity". This one blew up some dust in the underground but didn’t lead to a record deal immediately. It took the band until 1991 until they got a deal with the infamous label Turbo Music. The band’s only album “After The Battle” suffered from bad mastering, bad distribution and bad promotion. Even a re-release of the demo on vinyl, entitled “Reign Of Death”, didn’t help FUNERAL NATION much, they missed the boat. Having returned to the underground they came from (and never really left), they released two more demos and three 7”es on tiny labels before splitting up in 1997. But like many other bands who did not get the attention they deserved during their first time existence, FUNERAL NATION returned to preserve their legacy. Since their reunion in 2010, the trio from Chicago mainly (re-)released a lot of their old recordings, live, studio and even rehearsal. Besides these outputs, two EPs with new stuff saw the light of day as well. The release I talk about here is a mix of both categories. Yes, “Molded From Sin” is a compilation, the first on a proper label, and it doesn’t only offer old stuff. It starts off with the five tracks from the “State Of Insanity” demo and quickly it becomes clear why FUNERAL NATION became well known in the extreme Metal underground at the end of the 1980s. This simple mix of rabid Thrash Metal and elements of Proto Death Metal was pretty unique back then and had a balanced production, not too raw, not too polished. And songs like ‘Your Time Has Come’, ‘Reign Of Death’ or ‘Sign Of Baphomet’ still sound great nearly 30 years after they were recorded. If the circumstances of the band’s career would not have so unlucky, this demo would have heralded grand deeds. These five songs alone should be a good reason to check this CD out, even though the band republished them a lot of times already. Of course “Molded From Sin” features some more fine stuff. The second demo FUNERAL NATION recorded in 1992 is featured here as well. "Benediction" was the attempt to get a new deal after the end of the band’s alliance with Turbo Music. The five new songs showed the band a little more technical and complicated in comparison to their older previous stuff, just check the acoustic guitars in the verse of ‘Encased In Glass’ or the complex, more than eight minutes long ‘The Apocalypse’. Yet the general direction of the band hasn’t changed here, FUNERAL NATION still walked the edge of Death and Thrash Metal. And a song like ‘Maniac’ surely pleases anyone who was into the first demo. The CD gets rounded off by the recently and independently released EP “Funeral Nation" that should get some more spreading being put onto “Molded From Sin”. The three new tunes here show a band that definitely sticks to their roots. With the opening ‘Laceration’, we have a song that could have been from 1989 as well, while ‘Before The Dawn’ is more in the tradition of the second demo. In the end, FUNERAL NATION present a belated band anthem with a song entitled like the band itself. And surprisingly ‘Funeral Nation’ sounds like it was written in the early days of the band and never got recorded until now. So, despite the span of nearly thirty years, the songs on “Molded From Sin” sound pretty homegenous and depict the evolution of a band that knows their roots. It’s up to you to decide if you like them for their constancy or not. Check their music at: http://funeralnation.bandcamp.com, visit FUNERAL NATION at: www.facebook.com/funeralnationband, or check their label: www.vicrecords.com