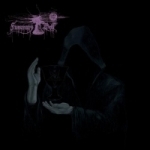 Welcome to “The Coven”, a séance of obscure Black Metal that should especially delight worshippers of ancient Greek Black Metal cults such as VARATHRON, NECROMANTIA (all with an “early” as prefix) or Italy’s MORTUARY DRAPE. While these three hooded figures from Finland are conjuring demons during necromantic rites already since 2007 I’ve totally overlooked them so far, but their first full-length is an absolutely satisfying communion. Vocal-wise it’s not your typical nekro snarl but rather a cavernous mid-ranged growl you’ll get here and musically the album varies between slower paced, atmospheric and forlorn passages (‘Detachment’), more melodic, strongly Heavy Metal influenced riffing to driving thrashing rhythms especially manifesting in ‘Cainian Confessions II’ where the mid section offers some really gloomy organ sounds as well. Though technically certainly not crafted for extremely demanding listeners, “The Coven” provides a lot of feeling and an almost hypnotic flow of very ancient Black Metal that is influenced rather by an often pretty much overlooked Southern European tradition than your usual Nordic assault and deserves to be hailed for that fact alone! A true gem for real Necromancers! www.myspace.com/funerarybell, www.undercover-records.de