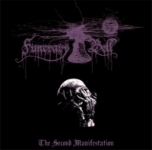 This is a second try from Finnland’s Black Metallers FUNERARY BELL, and I must say I am not totally satisfied. By considering themselves an occult band they had put some expectations in my mind. When such a strong word is used (I take it literally!) I search for a proof of at least one thing the occult stands for, and that would be – transcendence. Well, here the transcendent part is lacking. To reach that something outhere you need to be willing to take a risk, which FUNERARY BELL avoid like a plague. Taking their influence from DARKTHRONE they are to close to their idols in my opinion. I am not sure everyone will see the connection with the masters, but I think many will recognize it. The vocals are grim, the music is mid-to-fast tempo and groovy in some way, with the warrior styled hymnical parts and that is a good starting point. But the strangeness of worlds they touch and try to explore does not reach the listener completely. I found the album slightly romantic and that, in a world of high cynicism, is not a strong point. What can I say? Talent aside, there is one thing that these guys should deal with immediately and that would be – effort to lose themselves and explore more. I am not a fanatic of originality (quite contrary, I am a genre worshiper!) but sometimes you just need to push things further. When you have such a perfect vessel such as Black Metal your moral obligation is to sail the shores of unknown. Saying all this, I must confess that I mildly enjoyed the thing since it is sufficiently underground for my taste. And I was happy to hear some parts with the twisted melodies in a style close to LUGUBRUM’s. In the end, I would like to see in which direction this band will develop because by listening to them I sensed some roundness that points to a potential that could be developed. www.myspace.com/funerarybell, www.undercover-records.de