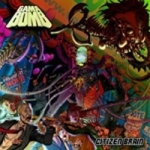 Starting off from where Ramon Claassen ended his review of GAMA BOMB’s "The Fatal Mission", this, the Northern Ireland outfit’s self-financed debut. I cannot help but admire the push GAMA has made since that review was written. Not to mention the cues these newbies have most assuredly taken from their fellow countrymen MASS EXTINCTION. As far as the music is concerned anyhow, all prior bets are off! GAMA BOMB have gotten their shit together and in a hurry! On this fourteen-track roller coaster, the overall precision and punishing pace of this album more than makes up for whatever wavering and audio rookie mishaps that Ramon wrote about previously and that stood out like so much toxicity on "Fatal". As honestly from the delivery standpoint of the music, I can’t pin point much to complain about. This friends, Romans, Thrashers and otherwise, is indeed a much welcomed sign to these ears! The delivery is right on the mark, production is clear enough, without losing any effective power and ultimately GAMA are indeed deservent of some attention. And from Earache’s A&R folk – obviously a major label record deal – yet in my opinion I would of liked to see this band evolve a bit more before handing them a contract. Now I know what I am about to say will sound like I am just talking shit, but the cold reality that is the music industry and the fact most labels don’t care about "evolution" of a band unless there is a dollar sign at the end of it – is still amazing to me, and that record companies just don’t care, they just seem to sign those they think they can quickly market. This unfortunately is exactly the case with GAMA BOMB. Guaranteed this disc is better than many of the newjacks on the scene right now playing Thrash Metal and landing deals. I will also agree that GAMA are owed more than a just handful of drunken errant spins in your CD player, yet I feel this album at the end of it all, just doesn’t possess a soul. "Citizen Brain" (one of the dumbest titles for a record) is by far a collection of some of the best Metal that has been attempted from Ireland, and assuredly even better than even some alleged veterans of the scene – say for instance the new DEKAPITATOR album (what a piece of shit that LP is!) (I heavily disagree here Mr.Rhodes! – Frank) Where GAMA falls short however is in the departments of originality, depth, and most certainly… lyrical substance. The vocals are okay and without a doubt carry the bullshit being screamed into the mic far beyond those written words’ prowess – think GEHENNA’s ‘Bitch With A Bullet Belt’ and you get the general and overall idea of this CD. That said, with the unabashed resurgence of what I call "rendition" bands, rendition meaning just that, they bring nothing new nor anything original / innovative to the style – they just give the listener their take on a subject – like a Metal era way past its "for sale by" date. GAMA BOMB have written a decent record, and recorded it at the right moment of time to establish their name so-to-speak. Yet I can’t help but think that in a few years when this resurgence dies out, that they’ll be lost and assigned to the "Where are they now?" file like so many others. www.gamabomb.tk