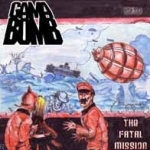 GAMA BOMB from Northern Ireland play some good old fashioned Thrash / Speed with strong influences especially from NUCLEAR ASSAULT and MOTÖRHEAD. After their 2002 two track debut called “The Survival Option”, this is their second effort being released on a split 7″ with Belfast Thrash-Punkers THE DANGERFIELDS. I only have the GAMA BOMB tracks. The first song, ‘The Survival Option’ starts as a totally 80s style mid-paced Thrasher and turns into a good time rocker pretty soon. Unspectacular but for me it works. Song # 2 starts out with some crazy whibble soloing and the vocals remind me a little of Paul Baloff. A tiny little bit. Some NWoBHM elements around as well and a catchy chorus that will make peple shout at live situations. Some more melodic solo later on. GAMA BOMB capture those old Thrash Metal farts like you and me with a lot of energy although they don’t reach the intensity of the old masters. I guess they’ll never get big outside of Ireland (please prove me wrong) but I’d like to see ’em live over there anyway. Possibly on my next holiday… or maybe GAMA BOMB could hook up with BK49 from Germany for a gig because although BK have a strong tendency towards Death Metal (especially the vocals), they’re big NUCLEAR ASSAULT and George A. Romero fans as well… I really like this stuff! www.gamabomb.tk