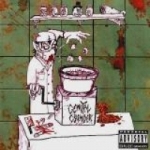 This French band comes out as an excellent surprise, thanks to a bunch of well written songs, well served by a adequate production. Their label tags them as a Grind Death act, well I would say that GENITAL GRINDER sound like your typical American Brutal Death, with only the infamous double vocals treatment (the duck + pig formula) evoking the Grind genre. Like I said, the production of this first effort is superb, crunchy and fleshy, and not very modern. The guitars in particular sound as if they have been taken from the first MALEVOLENT CREATION album, I dig this immensely. Lyrically the band deal with the usual disgusting topics in favour within the little world of French Grind, I am not an amateur of this kind of stuff (you know, stories about intestinal dysfunction mixed with all kind of venereal diseases with a childish concern for human excretions). Note that the last song is nothing else that an obscene “traditional” French song for drunkards or little boys at school, a stupid move if you ask me. But make no mistake, this album is excellent, especially in the songwriting department, with intricate songs; I doubt the Grind purists could fully appreciate it because of the ancient sound and the clarity of the compositions. Highly recommended, but only for the music. Contact the band at (I warned you!): hog@freesurf.fr, get more info about them at: www.adipocere.fr.