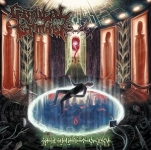 GENITAL GRINDER from Italy (not to be mistaken with a few other bands of the same name) are one of the oldest European extreme Death Metal / Grindcore bands. Originally formed under the moniker MASS SLAUGHTER in the year 1990 and although an interruption of eight years (1994 – 2002) surprisingly "Abduction" is the debut full-length. Do not know what the guys have been doing all the years, the discography has a manageable size, two demos before the break and a three-track promo EP in 2002. For comparison: the other essential Italian underground Death / Grind outfit CRIPPLE BASTARDS (formed in 1988) released just about 44 outputs, mostly split vinyl but also six full-length albums. "Abduction" includes nine tracks plus two songs from the promo EP, leaving the question unanswered why the band spared the third track. Musically GENTAL GRINDER are sounding very raw and reduced to the core. No useless stuff, just riffs, fast drums and husky growls embedded in rather simple structures. Sounds like an ablated version of ABORTED or DYING FETUS, for my ears the best comparison are the Dutch grinders INHUME or the Death / Grind pioneers ASSÜCK from Florida, USA. Luckily all modern elements of Metalcore are missing, making this album a very good classical Grindcore attack to blow your speakers and swirl your brain. www.facebook.com/genitalgrindermn, www.facebook.com/eyesofthedeadprods