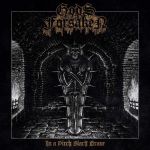 Sweden are back, the dusty sounds of almost forgotten times is blasting forward, and not only in Sweden actually, it is all of Europe that has started to get back to the roots, and showcasing what old school Death Metal with punch and feeling is all about, after a good deal of years with a tad too much focus on melodies and after that blastingly fast and technical ectasy, both from musicians and studio technicians. Though now it is all about darkness, straight forwardness and pure intensity. The three members making up GODS FORSAKEN are all veterans in the Swedish Death Metal scene, who became united for their love of pummeling old school Death Metal in JUST BEFORE DAWN, which spawned this band, where they are blasting even more Death Metal from before the creation of time. If you like buzzsaw guitars, heavy rhythms and gnarly growls, spiced up with a tad of melodic guitar leads, and an intense and at times eerie atmosphere and feel, "In A Pitchblack Grave" will punch you deep in the gut. Many years ago, I was more or less always looking for new things in music, and development from album to album, when speaking of established bands, I wanted to hear some new ideas, getting some new input, seeing that the Metal scene was evolving. It ain’t like that anymore, as the point of evolution for the sake of evolution isn’t a very good vantage point. Now I want music with feel and emotion, music where the music spews forth attitude and sincerity from the people behind the music, I want to be touched. Which leads us to that GODS FORSAKEN isn’t bringing as much as a dime onto the plate of evolution, but damn they are delivering their music with intensity and passion, they have written some catchy tunes that you can’t help yourself headbanging to, if you like this kind of dusty Death Metal from beyond, you can’t resist getting sucked into the bloody and dark universe of the band. Ride into glory, where no life dwells (always on the left hand path, like an everflowing stream – Frank): www.facebook.com/godsforsakenswe, www.soulsellerrecords.com