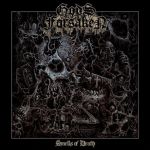 GODS FORSAKEN began with a veteran line-up consisting of guitarist / bassist Anders Biazzi (BLOOD MORTIZED, JUST BEFORE DAWN), vocalist Jonny Pettersson (WOMBBATH, JUST BEFORE DAWN, ASHCLOUD), drummer Brynjar Helgetun (JUST BEFORE DAWN, CRYPTICUS, JOHANSSON & SPECKMAN, MEGASCAVENGER), Gustav Myrin (ex – BLOOD MORTIZED) as lead guitarist and Alwin Bassphyx (ASPHYX) as rhythm guitarist. After their highly acclaimed debut “In A Pitch Black Grave” (2017), these veterans came up with the full dose of unmatched insanity-drenched Metal of Death “Smells Of Death”, which was produced by Jonny Pettersson, Anders Biazzi and their new guitarist Alwin Zuur. This record was mixed and mastered in Studio Unbound (REVOLTING, HEADS FOR THE DEAD, JUST BEFORE DAWN) by Jonny Pettersson and is now released in co-operation with Soulseller Records. In “Smells Of Death", GODS FORSAKEN plays with heart and passion, so the music flows like an aura of unimaginable power and wraith. GODS FORSAKEN’s mastermind Anders Biazzi revealed in an interview his fascination for horror and this album opens with a piece from the Italian horror film "Ill Notti Del Terrore", also known as "The Night Of Terror" in which there are phrases like "Mama, these clothes, they smell of death". Quite interestingly these words ("Smell Of Death") are also the title of this album where forty minutes of horror and death are served and where brutality and darkness collide with pure magnificence. And the blistering buzz saw from HM2! No, it’s Behringer HM300 (mentioned a s pink monster) that rushes through the speakers like crazy and destroys everything that comes its way. Jonny Pettersson is gurgling as if it is his lust and his life. Drummer Brynjar, who uses his sticks as a battle hammer, gets the band ready to war throughout the album. His warlike drumming leads the way which begins with ‘Smells Of Death’ and then from ‘The Crawl’ to ‘In The Pit We Shall Gather’ will appear as staple of tempo changes. Passionate and enticing riffing makes you feel all the force you can hold, while the ‘The Process Of Death’ will engross you with its crusty riffing, note-by-note guitar solo which is full of sensations and a gravy groovy mood. The same feeling is added to ‘Dead And Buried’ by the compelling guitar solo. At the end, ‘The Curse Of Matul’ is the only instrumental and it’s a homage to Lucio Fulci and his masterpiece "Gli Ultimi Zombi" (aka "Zombi 2", aka "Zombie Flesh Eaters"). It is played with those distorted guitars and the HM300 over it, making it a moving creation. In "Smells Of Death", of course nothing new is invented here again, but this album was made with such passionate craftsmanship that everything is absolutely feeling rightly balanced. Featuring a cover artwork by Patrik Tegnander / Chainsaw Design, GODS FORSAKEN created an eargasm of early 90s Swedish Death Metal reminiscing DISMEMBER, GRAVE, UNLEASHED, ENTOMBED and a bit of BOLT THROWER. Without any doubt “Smells Of Death” will be regarded as one of the finest old school Death Metal records of this year and for many more years to come. Explore more about the band at www.facebook.com/godsforsakenswe and visit their label page: www.soulsellerrecords.com