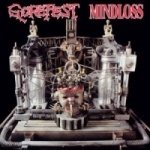 Usually I would say there’s no need to re-issue GOREFEST’s debut from 1991 as you can easily still find it almost everywhere these days. But if you’re a fan of the band or generally worship straight ahead old school Death Metal you should get your hands on this version nevertheless. As the title already reveals, "The Ultimate Collection" is far more than just another cheap new edition of "Mindloss", but an enhanced double CD set that (besides an impressive booklet) also features both of the band’s demos "Tangled In Gore" and "Horrors In A Retarded Mind" from 1989 and 1990 respectively. "Mindloss" is pretty much these two demos combined (plus the at the time new track ‘Mental Misery’ and the album’s intro) as all of the eight demo tracks got re-recorded for that purpose. But of course it’s always cool to listen to the rawer, more primitive originals and in GOREFEST’s case the band really used to be a damn brutal unit back in their early stages. While "Tangled In Gore" still showcases a band that lacks a bit of the necessary experiences and therefore focuses on sheer brutality instead, "Horrors In A Retarded Mind" offers classic Death Metal the way it was meant to be performed. From today’s point of view both demos had a pretty cool sound already, considering the noisy stuff that some other big names used to kick their careers off with at the time. No wonder that the band secured a record deal with Foundation 2000 pretty quickly and went on to fame and fortune via Nuclear Blast in the years to come. The aforementioned booklet features lots of vintage pics, flyers, demo covers, tickets and stuff and some historical liner notes (but unfortunately the lyrics are missing this time). So, all in all this is a nice re-issue for all GOREFEST die hards or historical interested Death Metal lunatics. If you’re still missing some other GOREFEST releases, make sure to check out www.nuclearblast.de as the entire back catalogue was re-released in this series. More GOREFEST info at www.gorefest.nl