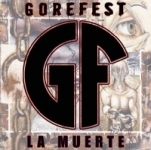 This whole reunion circus even in the extreme Metal scene is definitely an aspect that caused more disappointments in the past months than delights, so what can we expect from Dutch flagship GOREFEST in 2005? It has been a fact that the band got damned and crucified by a lot of die hard fans for their last two full lengths, but with a lucky smile on my face I can assure you that “La Muerte” is more than just an excuse for that!!! Expect the unexpected, which means a full force return with some real bangers and a real positive vibe of the good old GOREFEST days, which means to hell and back. Starting with the vocals of Jan Chris which remind me a lot on the “Erase” phase, which means powerful, deep throated stuff, but surely understandable with some little surprises. Riffwise you can discover a lot of reminders of the brilliant “False” days, which means banging heaviness, massive riffing and melodical vibe as well, truly classical GOREFEST style. It’s not focused on technical skills, but lots of feeling and earcatching tunes mixed with the known rock and classical Metal inspired guitarsolo works of the duo Bonebakker / Harthoorn. I guess most of you will smile while discovering GOREFEST blasting again on ‘For The Masses’ or ‘Man To Fall’, a track in the vein of classics like ‘Mental Misery’ or ‘Glorious Dead’. The same goes for ‘Malicious Intent’, but be also prepared for some slow morbid tunes which stand somewhere in the shadow of AUTOPSY and the heaviness of old CELTIC FROST. But be careful “La Muerte” has old school elements, but isn’t pathetic old school focused, which means here and there you can also find tons of groove and some well hidden modern Thrash elements, too. Most of all I think it is the production of Danish Artfarm Studios, which gives GOREFEST a modern touch in terms of a real heavy and disco destroying sound. GOREFEST defintely deliver an album that has a unqiue way of heaviness in this times of releaseoverkill and this is defintely all what GOREFEST was always about. As a die hard fan I’d wished to hear more “Mindloss” influences, but hey in the end GOREFEST are much better than ever expected to be again which makes be absolutely happy!!! There’s even some aggression and fucking blood on the artwork again, so one of the 2005 surprises is truely fullfilled!!!