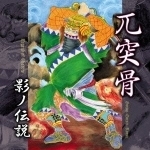 This is the return and second effort by GOTSU TOTSU KOTSU, the masters of Samurai Metal as the band members label their music by themselves. This makes actually sense as it is the name of an ancient Samurai and the lyrical themes are based on the history of these warriors in general. Maybe the monicker of the band might sound strange for some ears overhere but the music is more than brilliant. The outfit hails from Saitama / Tokyo and is led by Haruhisa Takahata who is responsible as well for the 4-string duties of the well known Japanese Death Metal horde DEFILED. The debut "Mouryou", released in 2009 on the same label, totally shaved my head and I thought it wouldn’t be possible to top this excellent effort. But I was completely wrong. "Legend Of Shadow" is a killer of an album, a total crusher with supreme skilled musicianship. What I really enjoy is the fact that the bass guitar can be heard very well. It gets a lot of room to develope and is also able to set a course. Just listen to this crazy bass lines delivered by an infernal great Haruhisa. Argghhh! In addition, his vocal performance is really outstanding. The voice is raw and brutal without using too deep growls. More a almost grunted and loud style of singing / growls. Hard to discribe but quite original if you ask me… I can’t recall a vocalist similiar to him at the moment – hm, wait… maybe Peter from VADER is rather close to him but still not the perfect match. The style of the eleven featured songs on this album is an lethal alloy of technical perfect played Death Metal and furious Thrash Metal riffing. Though the lenghty compositions have a lot of details and variation to offer the music flows and is remarkable catchy and natural. You can always discover new elements (e.g. extensive melodic leads, groovy riffs, crazy blasts, great drum fills etc.) and even after a couple of rotations in your CD player the entire material never gets boring. Despite the sophisticated performance the hellish trio never lose track of being a Death / Thrash squad so their musical creations are constantly brutal, aggressive and burst of sheer intensity. The production is dry and sounds organic. It compliments the tracks very well and it is nice to see that it is far away from these clinical and lifeless productions these days. Just check out the excellent opener ‘Prayer Of Vengeance’, the superb title track, ‘Harakiri’ or ‘Marishiten’ – you might not regret it. In case you have a chance to get the album, which includes a cover version of PINK FLOYD’s ‘One Of These Days’ as bonus, don’t hesitate to add it to your collection. And don’t miss them when they will hit European stages this coming September. For more info go to www.facebook.com/pages/gotsu-totsu-kotsu-兀突骨/137420836295935