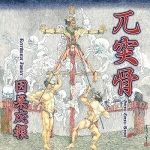 One of the best Japanese Death Metal outfits ever is back with a vengeance. "Retributive Justice" marks already the third effort by this Saitama based horde and the album is jam-packed with sheer musical brilliance. GOTSU TOTSU KOTSU comes up with the right ballance between new and old school Metal Of Death with a slight Thrash Metal approach.The skills of this trio are once again really incredible and so you might think they are sometimes not from this world. If you are familiar with one of their previous works you will probably know what I mean. Just have a listen to the absolute killer bass work / lines by Haruhisa who is in charge of the vocals as well. Just awesome! His two new comrades in crime, who joined forces with Haruhisa in 2014, don’t fall short of him and provide an outstanding performance as well. Keiichi’s guitar work totally shreds, especially his insane leads and harmonies. The competent drumming of Kouki creates a total devastating wall of sound that plattens everything crossing its path. This squadron is the best example how to create technical brillant stuff without annoying the listener with too much guitar wanking and gimmicks. Despite being quite complex at times the songs sound catchy and have a great flow. GOTSU TOTSU KOTSU has figured it out how to do things damned right. The ten featured tracks have everything a great and above average album needs. It has a lot of aggression and the intensity of all tunes is omnipressent. The songwriting is top notch and offers a lot of variety within its little bit more than 58 minutes running time. "Retributive Justice" never gets boring and you still can discover some new elements with every spin. Everything feels very natural and organic. It’s a pity that these masters of Samurai Metal (their lyrical concept is based on Samurai history and folklore) are not that well known over here. It’s time that this drawback has to be resolved as soon as possisble. So if you are into top notch stuff I just can recommend you to check out the title track or ‘Immortal Assassin’ and if you have a chance don’t hesitate to add this killer release to your holy record vault. I guess you won’t regret it. www.facebook.com/pages/gotsu-totsu-kotsu-兀突骨/137420836295935