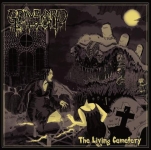 GRAVEYARD GHOUL could easily be on the Razorback roster with its kind of festering old school Death Metal dating back to the late ‘80s – early ‘90s ostensibly. It’s not something that would reinvigorate the genre if that’s what you’re looking at. It’s comfortable in its own clichéd vision which is not without its charms. This is during the time DEATH released “Scream Bloody Gore”, MASTER was finding a footing in the scene, SEPULTURA probably released “Schizophrenia” more or less around the same time. It’s that kind of music with that old world charm. I miss the early rabidity that was prevalent but this is something that’s more mid-paced, reminiscent of OBITUARY and SIX FEET UNDER. This band is from Germany, and “The Living Cemetery” happens to be the band’s second album. The overall vibe isn’t too far removed from the revivalist bands on the Memento Mori roster, MORBO and the kind, it’s also got a bit of that Spanish flavour to the proceedings. The gore element isn’t as prominent as say bands from that region and what’s lacking is that edge that would make this band stand out, that sizzle factor. Nonetheless, this is an enjoyable output for what it is. The band knows what it’s doing and it’s rather happy doing that. Easy-going, chugging old school music with Death Metal oozing from every pore. It’s not hard to dislike it but it’s not something exceptional either. The thrashier the better it is, because it needs that edge. GRAVEYARD GHOUL is fairly good with its clichéd but adorable Death Metal worship, doing everything like in the old times but little else. www.facebook.com/graveyardghoul, www.finalgaterecords.com