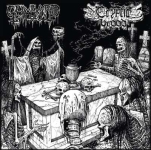 Two German representations on this EP "The Graveyard Blood” of two unknown bands. The first side cover three songs by GRAVEYARD GHOUL, a band that already has two albums on their counter ("Tomb Of The Moulded Corpses” from 2012 and "The Living Cemetary” from 2014) and prior to that a demo called "Necrocult”. After the last studio album released this year, there are already these three tracks called ‘Distasteful Hunger’, ‘Castle Freak’ and ‘Unconscious Void’… pretty productive. This release features a very good production! A good balance between the highs and lows and it feels like you’re in a rehearsal room with these guys. Very effective getting the most power out of these tracks. Because of some riffs and the vocals it has a rather Black Metal atmosphere which forms an interesting mix. From more sources is delved, because ‘Castle Freak’ has a real thrashy tone. The track ‘Unconscious Freak’ stood out because of strong riffs and pounding drums. A very nice acquintance with this trio and a reason for checking out their older releases. Listening to this reminded of AUTOPSY, DARKTHRONE, LANTERN, HATESPAWN and VILLAINS. The other side is executed by CRYPTIC BROOD. For an equal share, there’s also three tracks here namely ‘Rancid Sorcery’, ‘Basement Funeral’ and ‘Infected With Death’. Their Death Metal is a real trip back in time for let’s say a quarter of a century and reminded of the heaviness worshipped by Drowned Productions. It’s heavy and morbid with a strong AUTOPSY influence. CRYPTIC BROOD’s appearance is cool but GRAVEYARD GHOUL is a bit stronger because of the variation and better riffing. Still, it’s cool stuff and it’s nice to hear this familiar heaviness. In case you’re charmed by bands like IMMORTAL FATE, BLASPHERIAN, BURIAL, GORGOROTH, MORPHEUS DESCENDS, GRAVE UPHEAVAL and others, check them out! All additional information you can find at the following sites: www.facebook.com/pages/graveyard-ghoul/297144383663288, www.facebook.com/crypticbrood, www.finalgaterecords.com