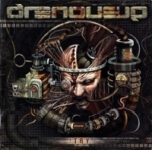 What fucking happened?! That is all I can ask when I listen to this latest disc from Russia’s GRENOUER. Without a shadow of doubt the GRENOUER of 2006 is nothing! relatively close in comparison to their previous record "Border Of Misty Times", that was just reviewed recently within these pages. Granted a decade has passed since "Border…" was originally released, and yes I agree some bands do change, but enough already! This is ridiculous! There’s not a shred of talent to speak of on this demo disc / album! High end (and by that I mean the production, and obviously the expensive layout / design of this CD, its slipcase, 2007 mini GRENOUER calendar, and all the digital multimedia accoutrements within) overly polished Mall-Core, Nu Metal or whatever the assholes at Metal Edge magazine want to call it these days, is about as far North of real Death Metal or real Metal for that matter as you can get! GRENOUER are in fucking penguin territory with this CD! "Try" features six songs of repulsive radio rock tripe, and one of the more annoying intros that I have ever heard, all of it reeking of pure grade shit! GRENOUER have lost it. Absolutely. And in the same breath I will say that GRENOUER have succumb to the most common pitfall in the music industry, and that is any of those artists who get it twisted in their minds, that it is better to forget the past and evolve with the times than it is to stick to their guns, and hone the skills of what got them the respect, admiration and accolades in the first place. Contact: grenouer@gmail.com or www.grenouer.com