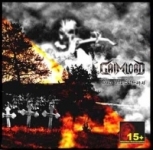 The polish band GRIMLORD, having released 5 demos, a debut live album (?) and a full length back in 2007, released their second album "Dolce Vita Sath-An As" in 2009. Right from the start, I felt this one was going to be a hard one to review. Based on a traditional Heavy Metal foundation, GRIMLORD should decide which style suits them better. There are many influences present here and the songs range from good old Black Thrash as in the opener ‘Dolce Vita Sath-An As’ to traditional Metal as in ‘When The Heads Are Going Down’ (a little too melodic for my taste with some odd keyboard work and blastbeats) and ‘Oh! My King’, which is probably my fave song. A good thrashy and melodic headbanger with nice guitar work, solid bass lines and tight drumming. The vocals are definitely an acquired taste. Not gruff enough, yet not totally melodic. Right here is where the album flips over. The production changes totally after the third song, sounding less natural and kinda mushy and then you find 6 (yes, 6) instrumental songs. These have a lot of the influences already mentioned, some adding little progressive elements here and there, but none of them really caught my attention. So, it turned harder than I thought. Basically, this album is divided into a 3 song EP (the first 3 songs) that showcase a good band trying to build their own style of Black / Thrash / traditional Metal and a 6 song instrumental EP that thrives for more "life", since the songs drift away without direction. Contacts: www.grimlord.eu, www.myspace.com/grimlordband