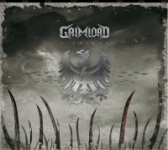 Polish GRIMLORD have been active since 1993. Their band name suggested some grim black metal and these guys started in such manner, but under a different monicker: VALLACHIA. In years they released a few demo’s and two albums, namely "Blood Runneth Over" in 2007 and "Dolce Vita Sath-An As" in 2009. Because I’m unfamiliar with their other work, I can only tell you about this one. GRIMLORD plays heavy metal with elements from black, thrash, folk and progressive metal. "V-Column" contains 10 tracks clocking just over half an hour. A second version of the cover shows the head of a decapitated SS officer, so hurray for that! As a whole, each track couldn’t really fascinate. Although there’s a cool riff or some heavy headbangable parts in every one of them, too often something promising is ripped by an unclear break. A too melodic lead, a vague keyboard tune or a lost rhythm section; each time they kill it. Also vocalist Bartosz Źrebiec doesn’t sound that convincing. Same goes for the production. The website shows a passioned band, so that speaks for them. The idea grew, while listening this for the fourth time, that it isn’t really that bad… but their obstinate approach is part of an approach in which the band don’t take themselves too serious either. They will do good in a live situation with plenty of beer, but in any other case, they’re on the wrong address here. These guys know how to handle their instruments and the combination of the more aggressive styles in their heavy metal could work when done right. I hope for the following release they forget all the unnecessary breaks and compose decent songs, working out the brutal parts. For now this album failed. Are you still curious, check the following links: www.grimlord.eu, www.facebook.com/grimlordband.