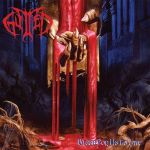 GUTTED
Bleed For Us To Live
(Repulsive Echo Records)
45:06min

I’ve seen opinions floating on the internet that GUTTED’s “Bleed For Us To Live” is some kind of lost masterpiece of brutal Death Metal from the 90s, but let’s set the record straight here. Originally it was released by Red Light Records in 1994 and the label was very diverse, releasing a broad kind of extreme music, so this was one of the reasons why GUTTED fell by the sideways in the back then flourishing Death Metal scene with many classic albums crushing the ears. Another and more obvious reason is that the songs aren’t very memorable and they just don’t have a unique sound. It is mostly mid-paced, chuggy, with some fast and doomy parts and even industrial rhythmics. A basic version of CANNIBAL CORPSE or SUFFOCATION without going really mental. GUTTED also remind me of two other US Death Metal bands which didn’t get much recognition at the time – MORTA SKULD and BAPHOMET – but later were sort of “re-discovered”. Now, from a current point of time, it sounds very unique (that fat, but lean bassy sound) and the songwriting style brings you straight back into the buoyant 90s US Death Metal time period. It is defintely a worthy visit, so if you’re after a no-nonsense, well-executed piece of meaty Death Metal, go ahead and check this brilliantly put re-release, still a lost masterpiece it isn’t. Band info: www.facebook.com/profile.php?id=100027689846739, label: www.facebook.com/repulsiveecho