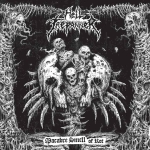 I have been two times in Lima, the Peruvian beautiful capital city. The first time I almost lost my flight back to Chile. The second time it was impossible for me to be on time at the airport… HELL TREPANNER is another killer underground Death Metal act coming from Lima. “Macabre Smell Of Rot” is their last output, a sweet compilation released by Poland’s Fallen Temple the current year. This new production features “Promo Rehearsal MMXVII” (2017) and 4 tracks from their split CD with their countrymates DESHUMANIZED, entitled “Towards The Diabolical Domains” (2019). The opener is ‘Sadistic Experiments In The Morgue’, a six minutes sick track charged with some vicious and fast passages of pure Metal of Death in its purest form. Then follows ‘Trepanador Infernal’ and ‘Rotten Flesh Sacrifice’, both in pure old school vein. Raw production, above-average to be just a rehearsal. After a short intro, you can hear ‘Into The Abysmal Depths’, a track that belongs to the split I have mentioned before. The production here is way better. The next track is ‘Spirit Of Serpent’ and the style showed here reminds me of Chile’s classic Death Metal act CANCERBERO (check out their EP “Malevolence”). ‘Morbid Under The Spell’ closes this great compilation. Here you will find the classic well-known South American vibe, so if you are deep into this kind of stuff this won’t disappoint you. Sometimes I hear strong influences from Peru’s HADEZ (just pay attention to the main riff on ‘Into The Abysmal Depths’ and tell me if it’s not a bit similar to ‘Human Extinction’ from the cult album “Aquelarre”). If I have the chance to catch HELL TREPANNER live on the stage in a small venue in Lima I’m sure it will be worth every minute… even if I have to lose another flight back home. You can follow this sick Death Metal act at www.facebook.com/helltrepannerdeath and get yourself a copy at www.facebook.com/fallentemple666