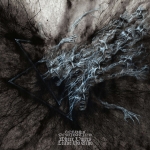 Formed in Germany a few years ago, but with veterans in this act of crafting extreme Metal of Death, this is the debut album of the band, and it is for me not a surprise that it reaches such a quality for a debut album. HORNS OF DOMINATION bases their sound in evil Death Metal that sounds like a tank rolling over skulls, adding touches of doom, damnation and blasphemy. The guitar sound at times reminds me of mighty BOLT THROWER and at the same time some of the slower tempos recalls AUTOPSY whilst they spice it with some bits that would make Euronymous proud if found in the “De Mysteriis Dom Sathanas” album. Add to that that the band has a weird yet very effective progressive approach, which recall “Morningrise”, some fantastic acoustic interludes, and some melodies that are not far away from what early DARK TRANQUILLITY created (although in a darker tone). Also to praise is the vocal approach, that although rooted in the extreme Metal reign, it does have quite a variety in its demonic approach, that adds more to the already impressive music creation and execution found in here. The majestic aura they are able to conjure is enough to give the chills to the unsuspecting victims that are unfortunate to be in their way. You can also feel that there are various music influences in the sound, but the band incorporates them in their music in such a smooth way that this can only be the work of higher demons. In this cursed and pandemic 2021, this is already among my contenders for album of the year. Every time I listen to it, something new shines (or obscures) my vision and hearing. Aging Sepulchral Voice Records doing a killer job. Great cover art by the way, to make this all complete. A masterpiece that will surely be talked about in years to come. www.facebook.com/hornsofdomination, www.facebook.com/sepulchralvoicerecords