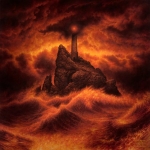 Founded back in 2000, this Swedish band presents here their 4th full length. Some people call them the inheritors to OPETH… or should I say to the OPETH that used to be a Death Metal band with progressive influences and a technical way of playing, while also using some clean vocals. Well, partly that is true, they do have quite a technical approach, they have that "dreamy" feeling, and yes they are excellent musicians. Also, they do have Death Metal vocals (and some clean ones) and yes, they do have a Death Metal sound in many places. Thus the comparison to OPETH is quite true there. But IN MOURNING still has a quite personal touch. I would say that this is closer to KATATONIA playing Death Metal with progressive touches, as the band sounds more "melancholic" and less "dramatic". Yes some would say that both bands share similar things, but that is the way I sense this band. I like the deathly vocals here, but they are not as powerful or brutal as the ones of Akerfelt. The way of composing is quite interesting and everytime you listen to the album something new catches your attention. They are very close to create those moods with their music, that only time and hard practice can reach. And yes, for those looking for a band similar to the "Morningrise" album, this is a perfect choice, although there is more to be found than just a mere copy. Yes, those dwelling for more evil sounds will surely hate this as they hate bands that drift away from darkness or brutality for one nano second. The more open minded Death Metallers will surely find this interesting. Great cover art by the way! www.facebook.com/inmourningband, www.agoniarecords.com