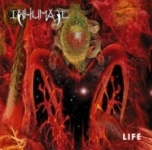 Grindcore galore! French uncommercial veteran Grinders INHUMATE (same line-up since 1994!) are back with part four of their concept album series about life itself. This is my first in-depth encounter with their music and I must say it turned out pretty cool! Musically, the band delivers an almost classic brand of Grindcore that owes more to NAPALM DEATH than CARCASS – so there is no gore worship here. There are some slight influences of Crust Core in the riffing and some Hardcore breakdowns are incorporated in the songwriting, adding some groove to the music, but overall you get a lot of great old school one-foot blasting as it is present in TERRORIZER or BRUTAL TRUTH. Vocally, singer Fred does his best to keep it variable, so you get everything from mid-range screaming, deep growling, some Hardcore shouting (rather seldom) and occassional pitch shifting gargle attacks. In general, they have an approach which is rather similar to East European bands than to the kind of Grind (it rhymes, hahaha) from Scandinavia. Furthermore INHUMATE are totally anti-commercial which means that they have done everything by themselves – thumbs up! Everything is played really tight and straight to the point without losing control of the speed. As I have heard from several people this is an inferno live on stage which is also due to the performance of their vocalist… have a look at the print on the CD and you know what he is doing to his microphone. The packageing also looks fine (front cover painted by Zig) and features a full colour booklet with all lyrics and some live pics. The first 1000 copies come as a digipak so I suggest that you act fast and contact their own distro to obtain a copy! You will also find a small media section on the disc with a live video, thankslist and additional information about INHUMATE. So, in case you are into bands like the above mentioned NAPALM DEATH or BATHTUB SHITTER and if you are a regular visitor of the FUCK THE COMMERCE or the OBSCENE EXTREME this well-produced and convincing underground record is an obvious choice. To purchase it contact their own 100% Do-It-Yourself label and distro at: GRIND YOUR SOUL Distr, c/o Yannick Giess, 4 rue de Remiremont, 67170 BRUMATH, France. Email: professeur.burp@wanadoo.fr. Website: www.inhumate.com