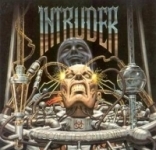 This is a long overdue re-release of INTRUDER’s extremely hard to find mini-CD from 1990 (don’t ask me what ridiculous price I paid for that on ebay not too long ago, urgh…). The layout is pretty much the same as on the original release with the exception that the thanx-list got replaced by liner-notes from the band’s original drummer John Pieroni. The entire material on offer here is not available on any other INTRUDER release, which is probably the reason why it became such a highly saught after item over the last couple of years. Next to its title-track, this mini-CD features re-recordings of three tunes off the band’s 1987 Azra / Ironworks debut album “Live To Die” (‘Cold-Blooded Killer’, ‘Kiss Of Death’ and ‘T.M.[You Paid The Price]’) as well as a coverversion of the old CHICAGO tune ’25 Or 6 To 4′ (which Germany’s THUNDERHEAD also covered the same year for their “Busted At The Border” album). I can’t really say that I consider this an essential release for people who would like to check out what INTRUDER was / is all about as the classic material definitely impressed me a lot more in the original versions, while the other two cuts are a little strange for a Speed Metal act… But for all INTRUDER die hards, this is of course a must have item and thanks to Lost And Found Records you will finally be able to purchase it for a regular price again. It was completely remixed and remastered by producer Tom Harding and is limited to 500 copies. Contact: www.lostandfoundrecords.com